Using local products, potée bretonne is a complete, hearty meal that will go down well with your guests in the winter months. The recipe for potée bretonne differs depending on which of the nine historic ‘pays’ of Brittany you’re in.

Arrange the vegetables in a dish and place the sausages and sliced pork knuckle on top. Serve piping hot.

The end of St. Brieuc bay and its historic market gardening activity

Market gardening, i.e. cultivating vegetables, has long been part of the economy of the ‘Golden Belt’ – the name given to a particular section of the coastal area in the north of Brittany, incorporating the Côtes- d’Armor and Finistère where the bay of St. Brieuc is located.

The climate and soil in this region are favourable to market gardening.

The secret of St. Brieuc’s productiveness lies in the sea advancing and receding and the temperate climate in all seasons, which has created an exceptionally fertile land known as ‘marl’ suitable for the cultivation of vegetables – onions, carrots, cabbages, etc. This produce has always formed the basis of the buoyant economy. However, competition, evolving urbanisation, difficulties associated with mechanising production, the small size of plots and the way they are spread out have gradually seen the number of market gardening operations dwindle. Consequently, the market gardening landscape has had to evolve.

The municipalities of Langueux, Yffiniac and part of Hillion are associated with the cultivation of onions, the traditional variety of which is the ‘oignon jaune paille des vertus’. The variety has a subtle flavour. It is sold at all the markets around the region and a few onion stalls still survive along the old Paris-Brest road.

The Jardin des Salines has been an organic concern since 1993.

Their fruit and vegetables are produced using farming techniques that respect the environment and seek a balance between plants, animals, the soil and the climate.

There are 8 – 12 people involved in cultivating and harvesting the produce. As well as selling at the local markets, vegetable hampers can be ordered online from the Jardin des Salines website and collected direct from the farm on Saturday mornings.

Served hot or cold and either roasted, grilled, fried, sautéed or cooked in a stew or casserole, pork is always full of flavour. It’s easy to cook and goes well with all kinds of vegetables. Breton sausage is made traditionally from only pork leg and shoulder, 75-80% Breton pork to 20-25% fat. That means it’s made from the finest cuts in a natural casing, low in fat and seasoned with Guérande salt and black pepper. It can be cooked in 3 different ways: on the barbecue, in a bain-marie then reheated on the grill, or in the frying pan.

The administrative district of Brittany produces the equivalent of 1.2 million tonnes of carcasses, accounting for more than half the overall production in France (2018 figures). The pork sector is therefore a major provider of jobs with roots in the local territory. Around 31,000 direct jobs are generated by the sector, which numbers almost 6,000 breeding establishments. Over 90% of these establishments are recognised by quality standards (Le Porc Français, Label Rouge, Agriculture biologique Agriconfiance, Agriculture raisonnée, etc.).

La Ferme de la Mare at Lamballe in the Pays de St. Brieuc has been breeding pigs since 1987, and selling them direct since 1995. They use only family and local recipes. No antibiotics are used, the pigs are fed a non-GMO diet produced on the farm, and animal welfare standards are observed. As a result of all these factors, the farm has been recognised by the ‘Cohérence’ mark since 2005, which certifies establishment as producing Sustainable Pork. It was the first farm to obtain this certification. Find their products on the farm’s own website or at Voisins de Paniers.

Also in Pays de Saint-Brieuc, in 1991 the Frères Guernion in Hillion set themselves the challenge of breeding pigs from birth to slaughter without antibiotics or GMOs. It involved a great deal of work with scientists to perfect the breeding techniques before the first direct sales took place in 2003, to individual customers and restaurants. Updates from the shop are now posted on their Facebook page. There’s also a meat-cutting plant at the farm where they process their own products for a regular clientele of around 3,000.

The legend of the Plœuc potato

For more than 100 years, the market gardeners of Plœuc-L’Hermitage (formerly Plœuc-sur-Lié) have been cultivating potatoes, to which activity this small town of around 4,200 inhabitants in Pays de St. Brieuc has always owed a large part of its fame and prosperity.

The tale of the BF15

The technical know-how of local market gardeners in the operation and care of potato cultivation led them to produce what they refer to as planting or selection varieties. That’s how the BF15, a descendent of the Belle de Fontenay variety, appeared in Plœuc in the 1950s owing to the hard work of the town’s market gardeners. It soon became the reigning variety in this region.

In the 1960s, all the farmers in Plœuc cultivated the BF15. Renowned for the quality of its taste and its firm flesh, the dark yellow potato quickly acquired a sound reputation with catering professionals, especially in the Paris region, who ordered their supplies in 25-kilogramme bags by the lorryload. At its peak, 400 hectares across Brittany were dedicated to growing the BF15, half of which in the town of Plœuc!  It was so famous as to have a Breton pop group named after it in the 1980s.

In the 1970s, the BF15 started to suffer from the arrival of new varieties more suitable for wholesale marketing. Bigger, more productive and allowing more plants per hectare, the Charlotte gradually displaced the BF15; the high cost of mechanisation and strict regulations gradually put the local growers off. Today there’s just one cultivator of BF15 left, in the town of Plœuc-L’Hermitage.

In September 1998 Henri Bozec, Mayor of Plœuc-sur-Lié and a passionate defender of local agriculture, spearheaded a movement by various stakeholders in the region to hold a major event promoting the local agricultural bounty. The Belle du Lié association was created by the producers of seed potatoes in Plœuc, headed by Pascal Allo.

The first Belle du Lié event was held in September 1999 to showcase Plœuc’s most important cultural heritage: the potato. Since then, the Pomme de Terre en Fête has attracted a great many visitors free of charge to its 3-yearly festival (over 30,000 visitors each show). It is currently the biggest potato festival in Europe.

The BF15 potato, a rare and interesting alternative that’s still talked about!

Supporters of the BF15 claim many advantages for this variety. It’s actually still a sizeable complementary crop for growers and demands a production model that’s better for the environment – it’s impossible to mechanise, so it makes sense. It’s also the ideal crop for organising your rotation system, because it ‘cleans the soil’.

The BF15 is also still popular with leading chefs, such as Thierry Marx, for its extremely enjoyable, slightly nutty taste and the way it holds its form however you cook it. Alone or as a side dish, the BF15 can be enjoyed in a number of different ways – jacket-baked, mashed, potato gratin, tartiflette, or in a salad or casserole.

There's nothing like a good cheese to end a good meal!

Although the Brittany region has been well known for cattle breeding for centuries, it has never had any appreciable cheese-making tradition. In fact, cheese has been long missing from Breton dinner tables.

Today, Brittany is a source of inspiration for cheese producers and the industry is getting organised. The region now produces cheeses of character with a pronounced iodine content, incredible colours and subtle flavours. Pays de St. Brieuc is not to be outdone!

The artisan family creamery of Vaumadeuc

Jean-François and Marie-Paule Lévêque took over the Vaumadeuc in Pléneuf-Val-André in 1987, continuing the family business of their parents and grandparents. They soon realised that to evolve, the profession of peasant farmers needed other activities to complement the traditional ones.

They had the idea of processing the milk they produced on the farm to give it added value. Their Tomme du Vaumadeuc was the first product of their cheese-making venture. Success led to the production of Val Doré, a monastery cheese, and eventually they created Grand Madeuc, a cheese in the Gruyère style. The creamery uses only unpasteurised milk. Unpasteurised milk contains lactic ferments which give the cheeses their varied, refined flavours, but requires the milk to be processed straight after the morning milking.

Along with the cheese-making enterprise, Jean-François continues to cultivate the land. In particular, he started planting buckwheat a few years ago, a common annual cereal in Brittany that goes to make the ‘black wheat’ flour used in the Breton galette pancakes. Since 2020, customers can now purchase products from the creamery all year round via the Pour de bon website. 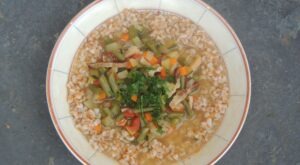 Country-style spelt soup PARTAGER CET ARTICLE Discover spelt! This ancient cereal is adapted to cold and poor soils and has many environmental and nutritional advantages. 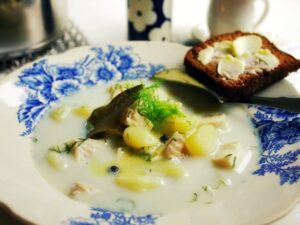 Pike perch soup SHARE THIS ARTICLE Automn is here ! And what better season to enjoy a steaming bowl of soup. But not any kind 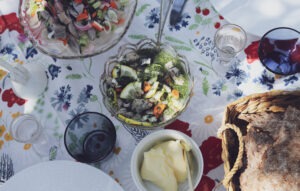 Four recipes for Midsommar herring SHARE THIS ARTICLE Midsommar what ? Midsummer or Midsommar in swedish is the most traditional swedish holiday. The celebrations are